Beirut, Lebanon,
Building on its dedication to enhance educational initiatives and reform, Intel, in collaboration with Arab Thought Foundation (ATF), Triple C, EduLab and the Ministry of Education has launched the first of its 1:1 e-learning program in Lebanon. This program initially underlined in a memorandum of understanding (MoU) signed in December 2007, the “Dissemination of Digital Learning in Arab Countries” project, which saw the donation of 9,000 PCs built on Intel technology and allocated for education purposes in Egypt, Morocco, Palestine, Lebanon and Jordan.
Lebanon was selected as the first Arab country to pilot the e-learning initiative with a donation of 560 PCs of the Intel-powered classmate PCs to the Ministry of Education, which were then distributed to nine public schools across the country. EduLab was called to bundle those PCs with an innovative software in order for students to use it in classroom or at home. 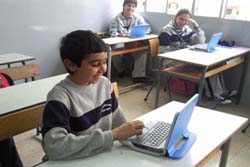 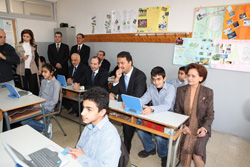 with the support and guidance of the Lebanese Minister of Education and Higher Education, Mrs. Bahia Al Hariri, a working group was formed to follow-up the implementation of this project and included representatives from the aforesaid Ministry, the ATF, Intel Corp., EduLab and Triple C Company (Intel agent in Lebanon).
Following the selection process, workshops were set-up to acquaint participants with the concept of digital learning, while introducing and training them on the methodologies and tools used in digital education; Intel-powered classmate PCs, digital content and others. As a result of this, both faculty members and students at the selected schools will have access to high performance computing, enhancing their quality of education through digital literacy.
EduLab has installed all science material (physics, chemistry and biology) onto the classmate pc enabling users a better learning experience through animation, audio and interactive exercises.
Phase two of the initiative, currently under implementation, works on gauging the responsiveness of teachers and students to the newly learning methods, with a focus on assisting them to overcome any difficulties they may encounter. Until now, the feedback has been very positive, with teachers acknowledging that the use of the Intel-powered class PC has increased overall student engagement and productivity.
Saturday, October 3, 2009

100,000 students benefiting from Edulab's products, and counting
Reported 20% boost in students' grades
Adopted and used by the top 200 schools of Lebanon
I could engage my students in classroom and get their attention during all the session period
Science teacher
Physics, Chemistry and Biology are now fun more than ever, your software made me love physics :)
Student
My kids are now using computer for study, not only chat and games, amazing software! Thx EduLab
Parents